Point of interest
Circuit n° 1
This path was impacted by the fire of August 04, 2020, it remains however passable except for these parts:
- Between the valley of the reds and the reed bed (point 5)
- Between Gatasse and Les Rouges (point 6)
- Between Gatasse and Saint-Julien (point 7)
- Forest track of the ventrons (point 8)
Traffic inside the areas destroyed by the fire (excluding highways) remains prohibited until further notice.

Access condition: Between June 1 and September 30, access to forest areas is regulated by prefectural decree and may be by municipal decree, for your safety and the preservation of sensitive sites. Before you follow your “stroll desires”, call 0811 20 13 13. Each day, you will be able to find out whether the site where you want to walk is free access all day, open only in the morning, or completely closed. Depending on the weather conditions, the “forest fire” danger level (orange-red-black) is known no later than 6 pm for the next day. 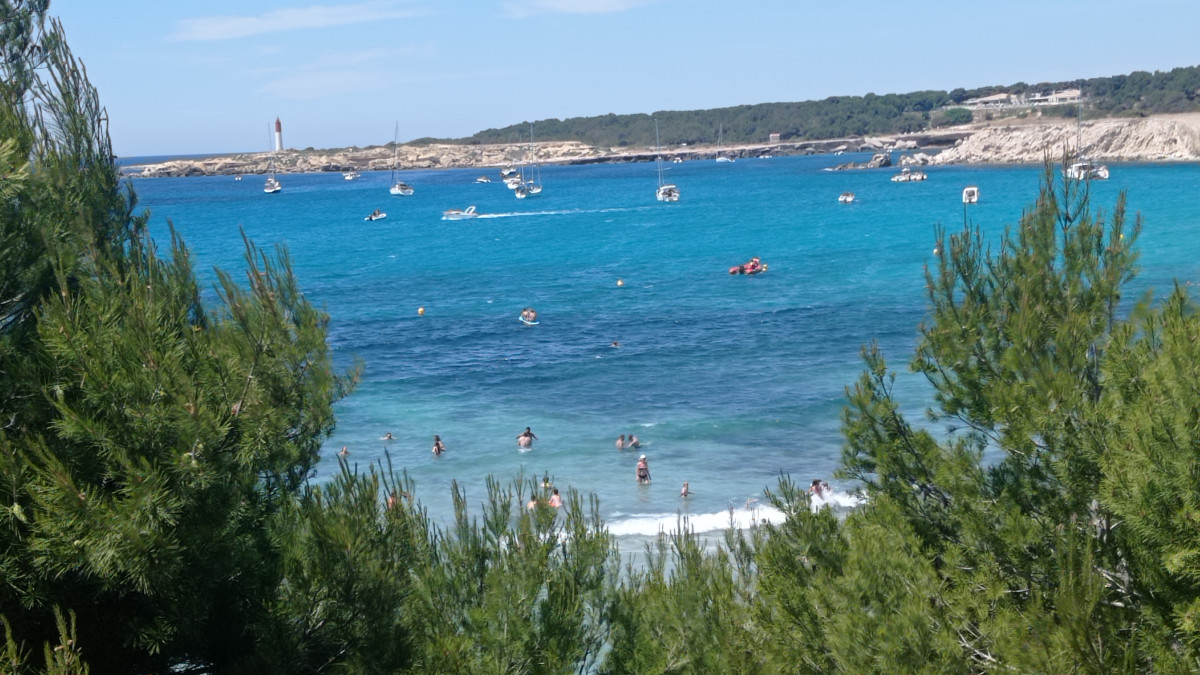 From the Crown train station, go up and turn right onto rue Olivier Griscelli towards the Saint-Jean-Baptiste church.

It was erected in Crown stones in 1666. Each corner stone of the bell tower was thus donated by a quarryman who engraved his mark on it. Inside the church are exhibited quarry's tools. The brotherhood of the Traceurs de Pierre was the driving force behind the creation of the village of La Couronne in the 17th century.

Built in 1887, with a clean height of 27 meters, the semaphore dominates the beach at 50 meters at sea level. It belongs to the National Navy, it operates 24 hours a day, 7 days a week, it provides surveillance maritime approaches.

Then take the Chemin du Phare.

In the Middle Ages, surveillance systems called “pharots” followed our coasts in order to signal dangers but also to position capes and points. It demonstrated the presence of the Antibes pirates at the Crown in less than 30 minutes by lighting two wood fires. The current lighthouse was erected in 1960. From its height of 30 meters, it projects a red light beam to indicate its position. 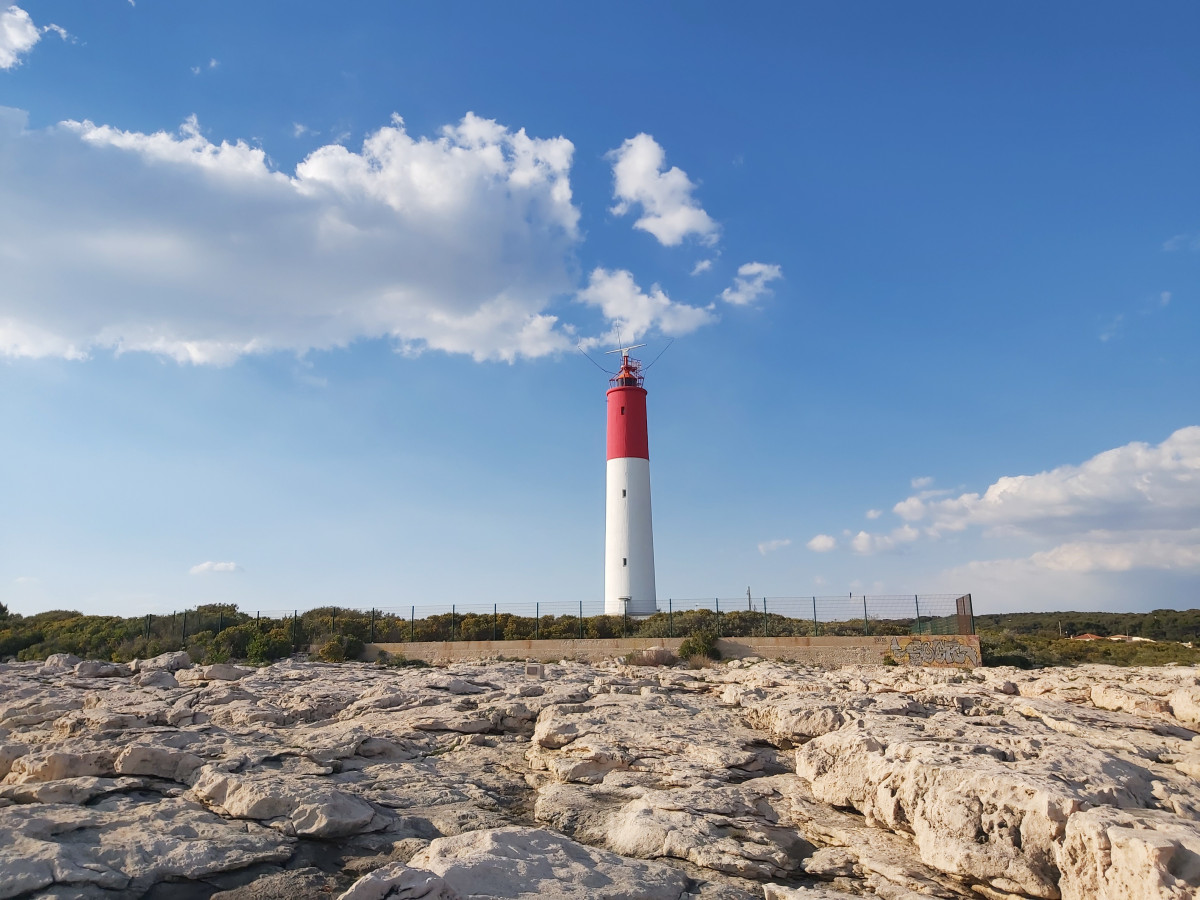 From the lighthouse, continue to the left towards the coastal path. You will arrive at Couronne-Vieille Cove and its ancient crown stone quarry.

The submerged quarry is currently preserved over an area of ​​1,200 m2. The sea penetrates very deeply into the quarry and sometimes covers it up to the working face. It was undoubtedly exploited during three distinct periods: from late antiquity to the Middle Ages, to the XVIIth century for the great construction sites of Louis XIV and from 1821 to 1912. The materials were shipped to Marseille in-situ, as evidenced by the presence of a semi-circular mooring post.

Go around the beach and go up the stairs. You will discover the remains of a Gallic village dating from the 6th century BC. on the tip of the Arquet (in front of you).

The archaeological site is protected by cliffs overlooking the sea on the south side and defended to the north by a fortification which bars access to the site. The occupation of this habitat extends from the beginning of the 6th century to the end of the 4th century BC. The organization of the dwellings testifies to a structured town planning, composed of elongated blocks served by two streets. There are 35 or 40 of the houses with a single room, quadrangular plan and occupy 9 to 16 m2.

Follow the path, taking care not to get too close to the edge of the cliff (risk of landslide), you will see submerged stone quarries as you reach the Beaumaderie cove.
With an area of ​​2,000 m2 but three-quarters submerged under 0.30 m of water proves the antiquity of the site's operation (Roman times). 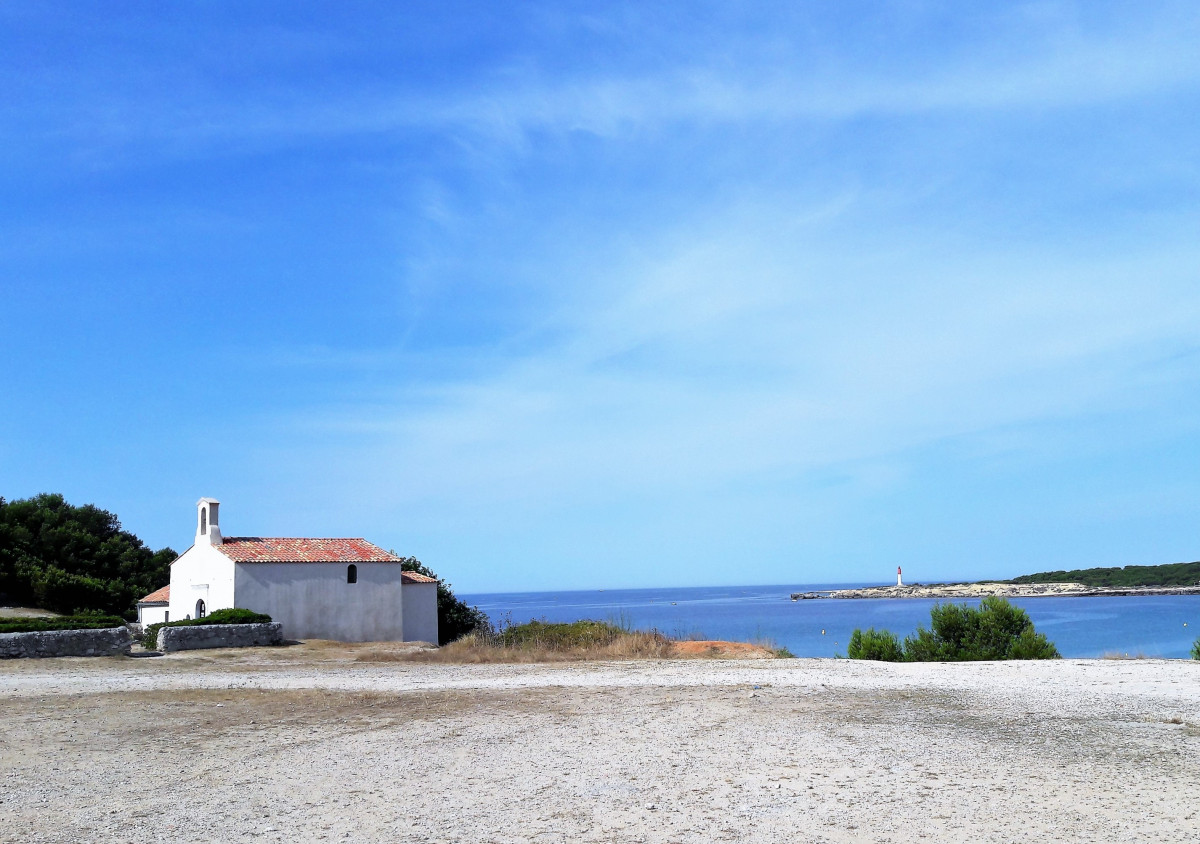 Continue to Saulce beach, cross the beach to go up the stairs overlooking Sainte-Croix beach.

Head to the Chapel of Sainte-Croix from the 17th century BC.

You will notice on the left the remains of the old chapel from the 12th century. The old 12th century chapel was built by the Benedictine monks of the Priory of Saint Genest in Jonquières, who dedicated it to the Holy Cross. Called "Santo Terro" by sailors, this place and its sanctuary belonged to the parish of Jonquières until the Revolution. The new chapel dates from the 17th century, it is notably made up of four columns from the old chapel and they form the link between the two holy places.

Continue your way through a pine forest. 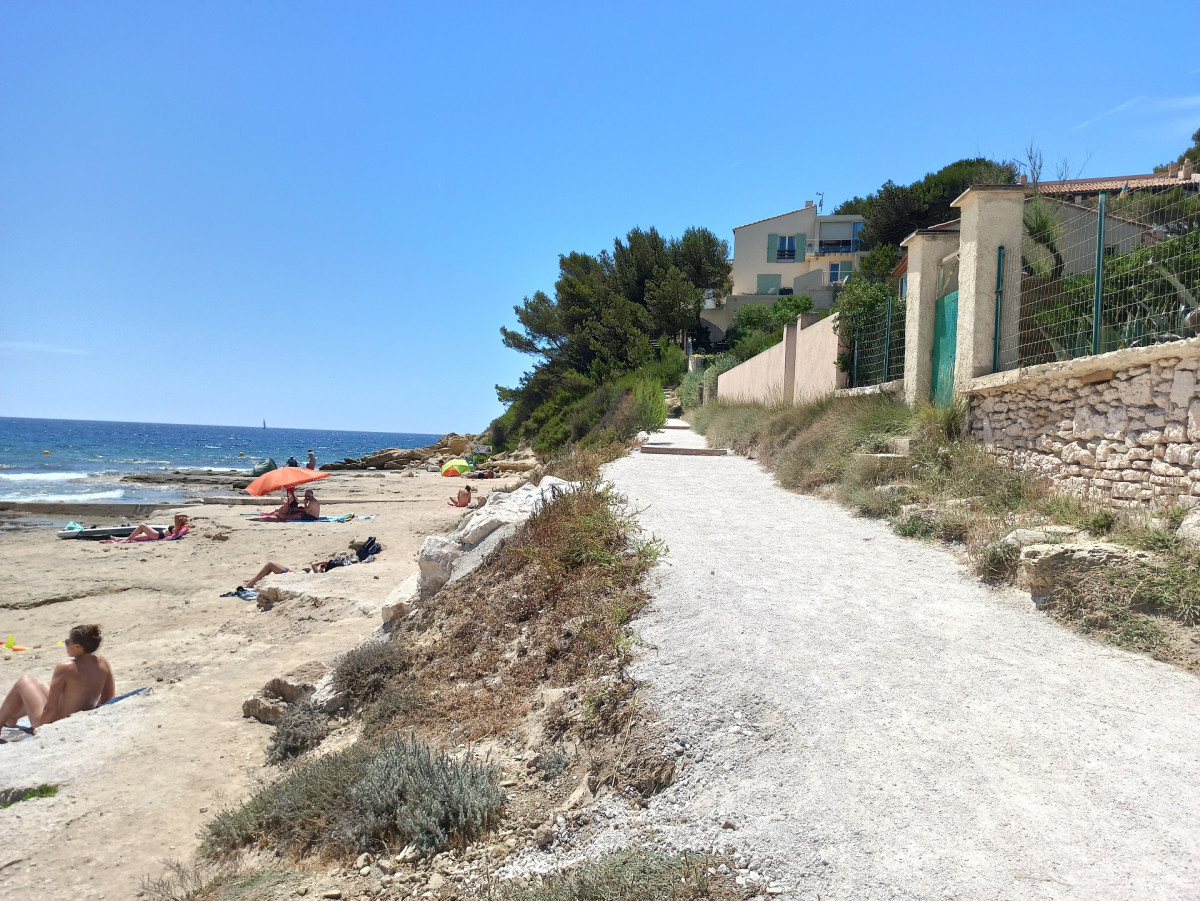 Pass near the radar station (German military remains) before arriving at Anse des Tamaris, with its small port that you will bypass.

The coastal settlement allows the local population to benefit from the food resources of the sea and inland, but also from the Greek and Etruscan maritime trade. The village represented a vast agglomeration of nearly 1.5 ha protected to the south by cliffs and to the north by two lines of fortifications which split it into two parts. Succeeding houses of wood and cob, the solid-built village which developed from the first quarter of the 4th century BC shows the arrangement of dwellings in various shapes, organized along traffic axes : single-room houses isolated from each other or grouped into blocks, houses with several rooms in a row or with a courtyard vestibule.

Then go down to Boumandariel cove, continue towards Four à Chaux cove and then towards Grand-Vallat beach.

This sandy beach is bordered by a reed bed: it is a wetland where reeds grow which shelter a very varied fauna including mammals (nutria), amphibians (southern tree frog), birds (hen and water rail ), reptiles (viperine snake) and aquatic insects (beetle and gerris).

Reed beds are relatively simple ecosystems, dominated primarily by a plant species, the common reed or sagne (Phragmites australis). The common reed is a grass. Its root system and rhizomes sink up to 80cm, usually in flooded or waterlogged soil. It can colonize various types of aquatic environments such as shallow marshes, pond belts, canal edges and estuaries. Despite their low flora richness, reed beds are home to major conservation issues in terms of animal species, many of which are strictly dependent on this environment. The reed beds thus constitute a habitat with high heritage value, thanks to their potential for hosting wildlife, mainly birds and invertebrates. They are considered to be a decisive habitat for biodiversity, in particular for the paludicultural avifauna, that is to say the birds dependent on marshes. It is a breeding habitat for vulnerable and rare species in Europe, such as some herons, ducks, raptors and passerines. For other species, it is its role of interface with the aquatic environment that is sought after, or of protection of a flooded environment offering perches (roosting sites for swallows or starlings). As a natural infrastructure, reed beds protect the banks from erosion, help purify water by absorbing nutrients (phosphates and nitrates), oxygenating it and fixing heavy metals.

Go through the botanical path and in front of the Boumandariel pond, then take the path on your left which goes up towards "les Rouges". 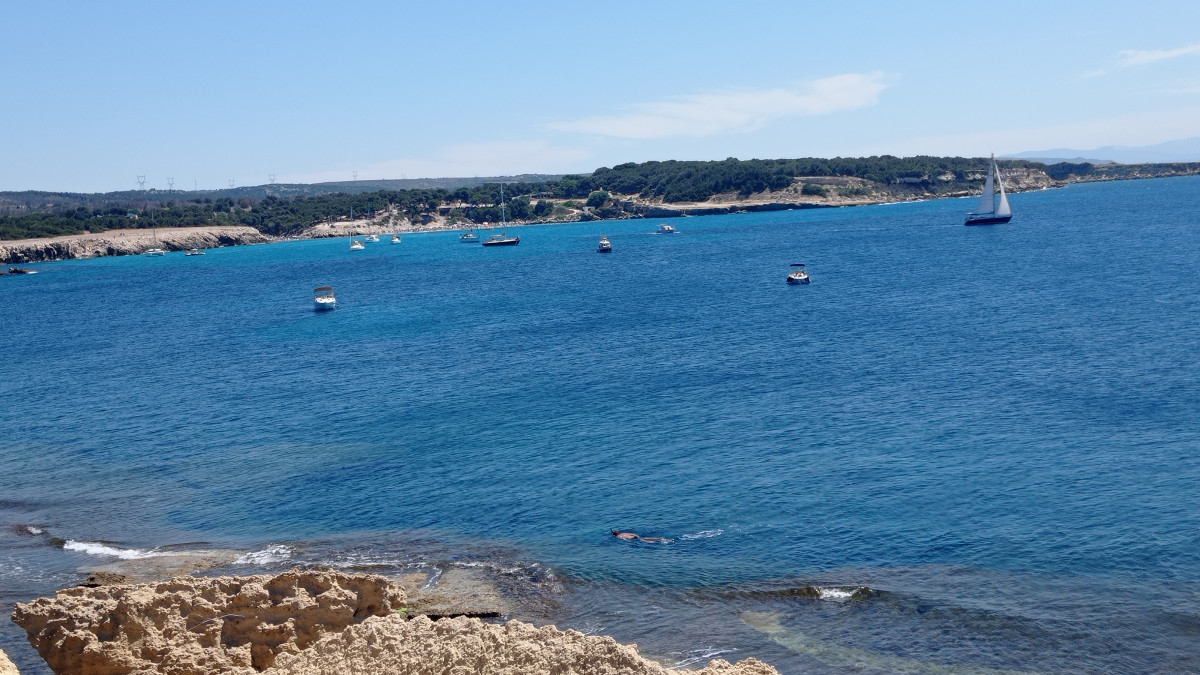 At the roundabout, cross, at the height of the sign "les Rouges" turn left on a path marked in yellow, then on the right the chemin des Roussures.

Go over the railway bridge and immediately after a second small bridge, turn right and climb north into the pine forest.

Pass the nozzle under the RD9, cross a barrier and continue in the Vallon d'Artou.

At a fork in the pine forest, turn right and follow the yellow markings. 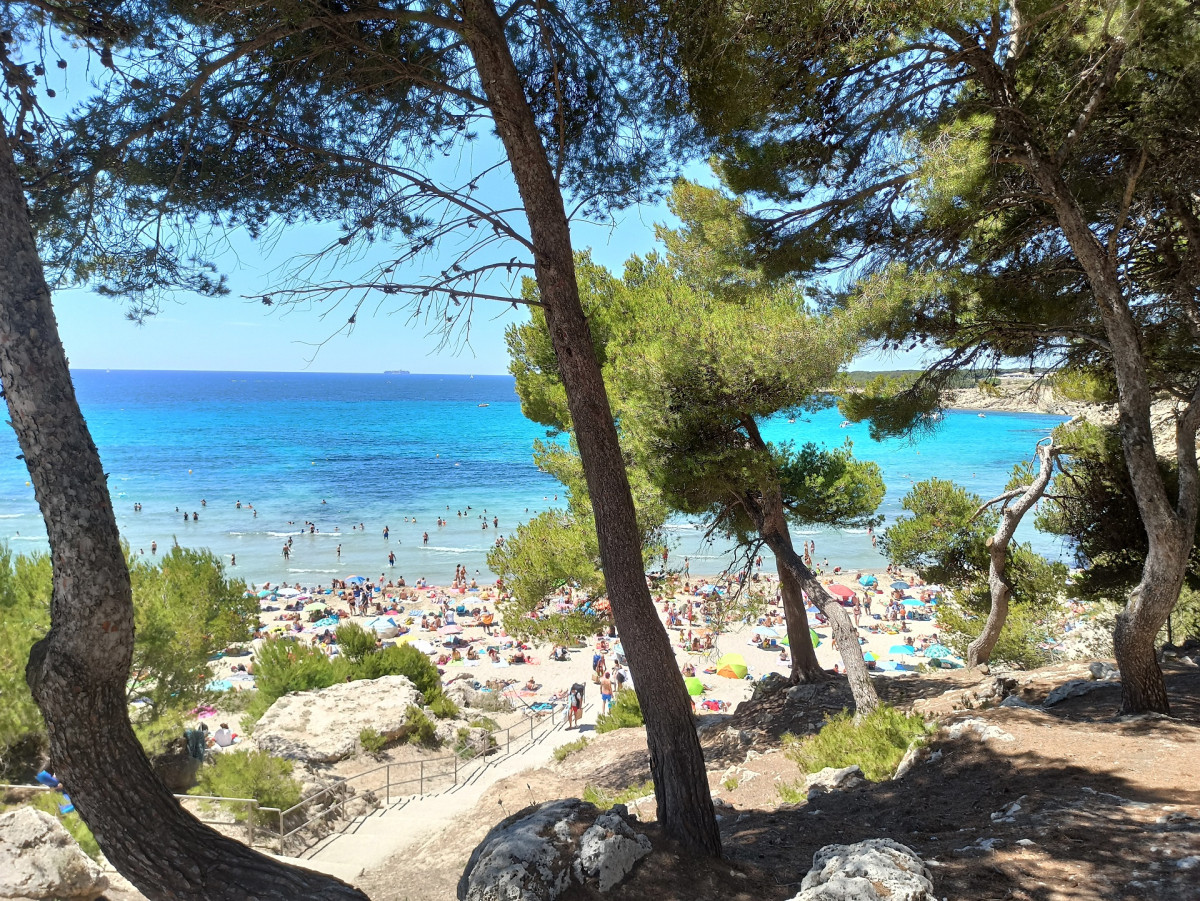 At the next junction, turn left before the underground cistern.

At a crossroads of tracks, turn left and follow the sign "les Laurons" which will take you towards the Tour de la Vigie and near a cistern.

The track passes below La Vigie.

Pass a cistern and walk (yellow markings) on the plateau which will bring you to the Col de la Gatasse (altitude 110 m). 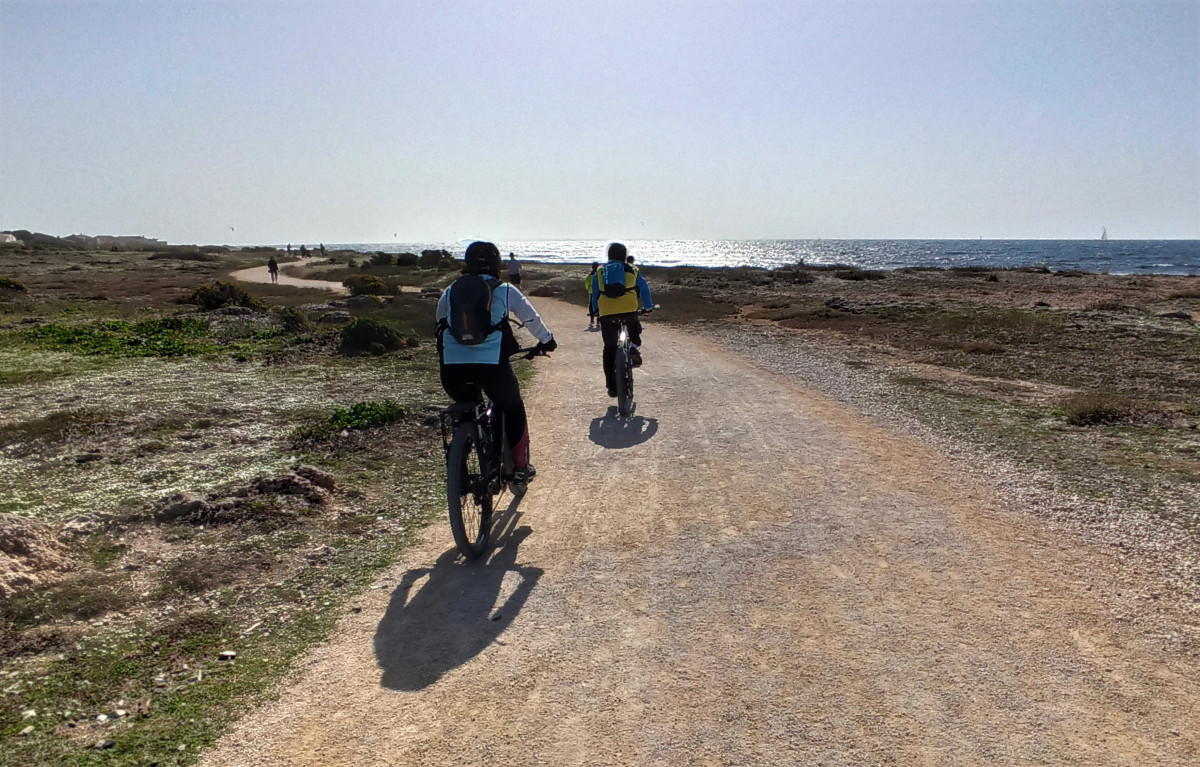 Carefully cross the RD49 and follow it to the right for 200 m behind the security wall.

Leave the road to take a track towards the building serving as the headquarters of the Hunting Society "La Loutre".

Further on, turn left on the CB 101 track and at the tank, join the GR.

Continue west on the main track and descend the Vallon de Crapaou.

Walk past properties and olive groves. Go under the railway line and join the route des Laurons.

Take the path located on the side. 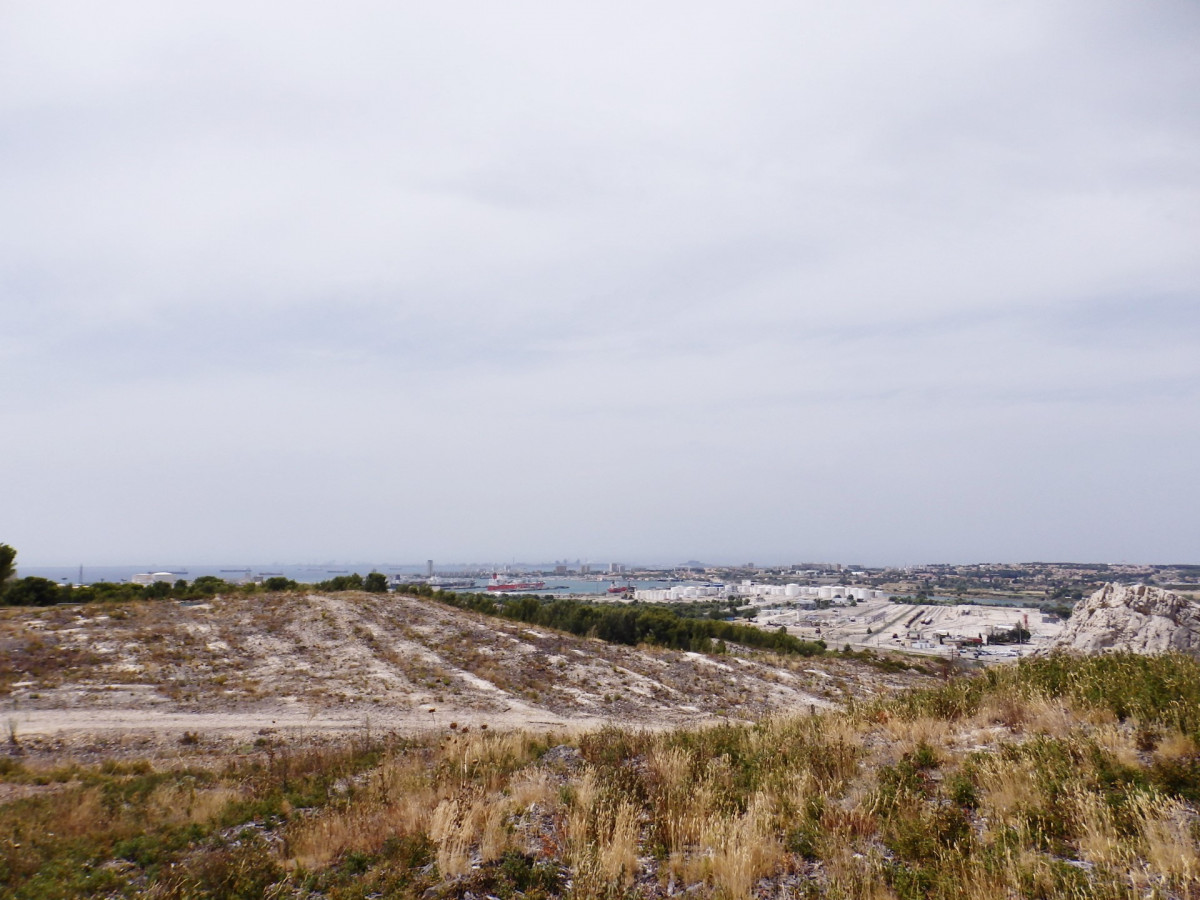 Cross the road in front of the EDF factory.

Take the path that runs along the power station to the Laurons beach.

Then take the rue des Laurons and its ledge, to the port of Laurons.
After the small roundabout, turn left and take the path between the villas.
Pass near a German military vestige dating from the Second World War and then continue the path to the left until the Bonnieu Nord car park.

Go around the car park and follow the path on the right.
Pass in front of the naturist center, the Pointe de la Donnelle and continue your way on the Carro greenway, through the Bonnieu plain and its rich flora and fauna

The area concerned is of major floristic interest largely due to the existence of an original substrate (deposits of molasse from the Miocene or calcarenite from the Burdigalian). It hosts, among others, 8 species of protected vascular flora: Allium chamaemoly, Convolvulus lineatus, Hedysarum spinosissimum, Helianthemum ledifolium, Ophrys bertolonii, Merendera filifolia, Gagea mauritanica, Hyoseris scabra). In this area, we can notably note the nesting of three species of birds: the Eared Wheatear (Oenanthe hispanica), the Great Crested Cochineal (Galerida cristata) and the Ring-necked Plover (Charadrius alexandrinus). 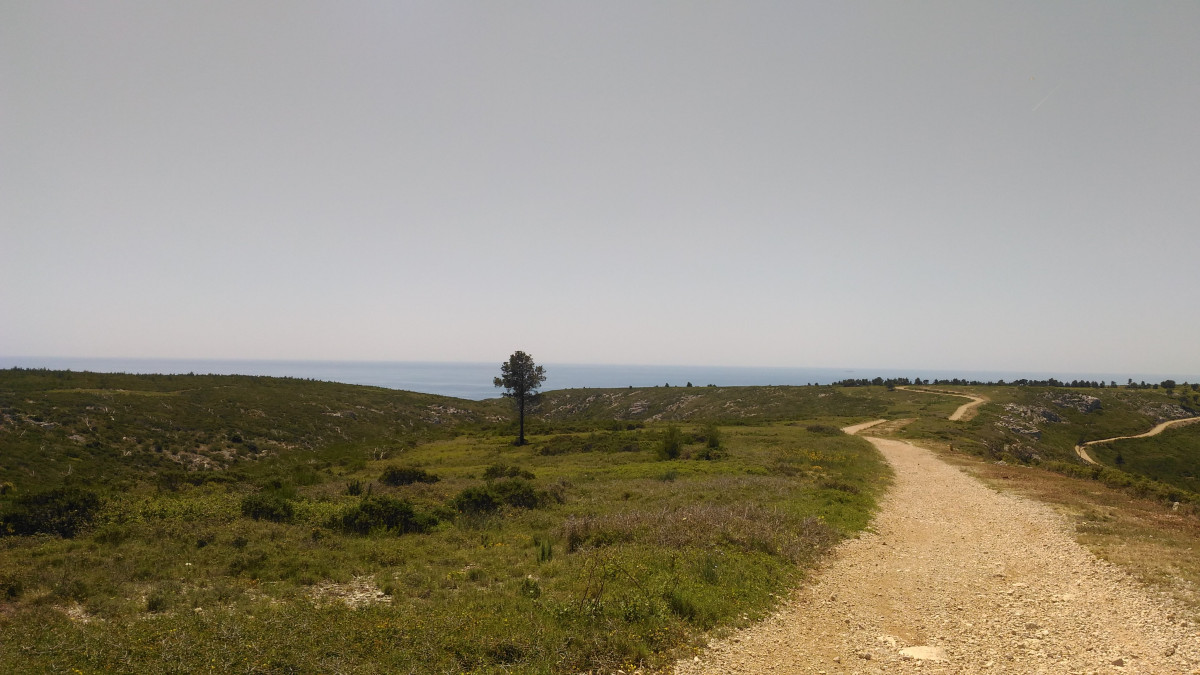 Passing through the Arnettes cove, you arrive at the Pointe de Carro.

The organization of the Pointe de Carro quarry dates back to Roman times and recalls the construction of the Pont du Gard blocks.

Go around the camper van parking lot, pass the Croix de Carro, the fishing port, the wide wind quay and the beach.
After the small beach of Carro, follow the coastline to the Baou Tailla quarry.

Since antiquity, coastal quarries have been widely exploited to build the main monuments of the Marseille city. They offered a double interest: Outcrops of soft rock, easy to cut, a shell limestone characterized by a pink or yellow color, which belongs to the geological stages of the Burdigalian, in the Tertiary era formed in the Tertiary era. The coastal location of the quarries facilitates transport by direct loading of blocks onto boats. Baou Tailla quarry, clearly established above sea level, is one of the best preserved coastal quarries. It is characterized by three large extraction units, distinct from each other by vertical cutting faces. The traces of tools left by the quarrymen make it possible to reconstruct the various extraction operations which demonstrate processes that have changed little from antiquity to the industrial era.

Continue to the right on the Chemin de la Douane before reaching the Verdon beach by stairs.

Cross it and go up to the right on the rich point by stairs in dressed stones.

Turn left towards the North towards Chemin du Sémaphore and come back to Crown station, via Rue Olivier Griscelli.
Add to travel planRemove from travel plan

Over a distance of 24 km 500, the Cap Couronne loop located in the southern part of the town of Martigues, will make you discover an exceptional natural and historical heritage.
From a still wild Côte Bleue coastline, you will be able to appreciate a floristic and faunistic environment of national interest, as well as geological, archaeological and historical curiosities.
Opening period (s)All year round.