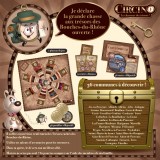 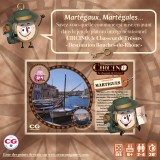 The initial desire of Créacom Games was to develop a board game that "really" puts forward the municipalities and heritage of Bouches-du-Rhône.

Objective perfectly achieved with this new version of our Circino game range, the Treasure Hunter.

From Marseille to Aubagne, via Aix-en-Provence, La Ciotat, Arles etc ... 36 municipalities of department 13 will occupy a central and predominant place in the game.

CIRCINO - A Treasure Hunt in the Bouches-du-Rhône

So that everyone can discover these towns while having fun, the company Créacom Games has opted for an intergenerational theme: a treasure hunt.

Who, as a child, has not dreamed of discovering a Mysterious Treasure?

CIRCINO - A gameplay accessible to all

This crossing of Indiana Jones and Jumanji will allow EVERYONE to occupy the long winter days in conviviality and good humor. And for that, it was imperative a gameplay "All public".

To play at Circino, you don't need any special knowledge of the Bouches-du-Rhône. Only chance and the adventurous talent of the players will win the Game!

CIRCINO - Goal of the game

The players select 8 "Objective" cards (therefore 8 communes) and they collect the 8 "Objective" pellets corresponding to these 8 cards. They shuffle them face down then place them on the different chests on the game board.

Each player then collects at random or he chooses 2 "Objective" cards among the 8 selected.

The Goal of the game will consist in finding the 2 “Objective” discs corresponding to his 2 cards then in bringing them back the 1st to Circino in the center of the board ... with only the dice and his sense of adventure!

In their quest, players will not be alone and can count on the help of members of the Circino family through the bonus cards