Poutargue or boutargue is a culinary speciality in several Mediterranean countries: Spain, Sardinia, Greece and Egypt.
It was already being eaten by Egyptians in the pyramid era. It was undoubtedly imported to Provence by the Phoenicians when they founded Marseille in the 6th-century BC. And the recipe is the same today.

In 1770 the “Dictionnaire portatif de commerce” explained that it was made in eight places in Marseille, including “Martegue”.
More precisely on the banks of the Canal Galliffet where France’s last “calen” fishermen work today. A “calen” is a large net - 95 m of nylon mesh - stretched between the banks of the canal to trap migrating mullet every year. The fishermen then delicately extract the egg sacks. They are then rinsed, cleaned and salted abundantly, pressed between two planks of wood for days, then dried in the fresh air. The task is still entirely traditional.

The scarcity of the raw material makes it a luxurious product with full sea flavours. 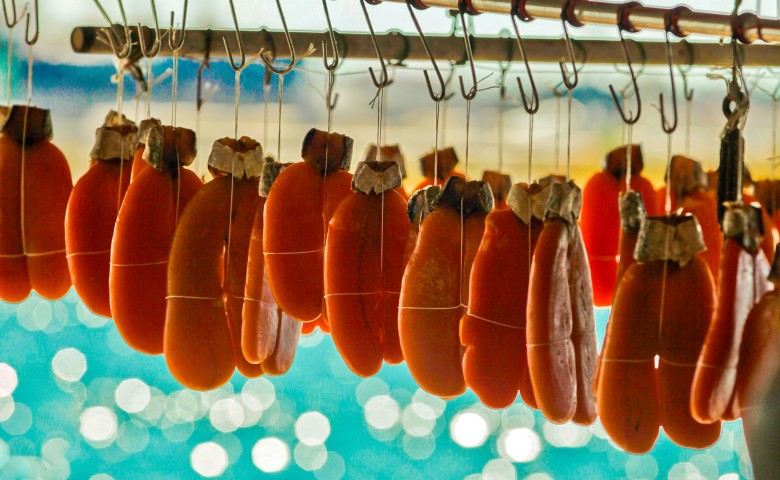 How is it served?

Martigues caviare is a strong delicacy served sliced or toasted with a glass of wine for the aperitif, grated in pasta or salad, sprinkled over grills, or added to sauces.

You know that in Martigues we are very fond of mullet eggs called at home the poutargue. This product is typically local.
Natural, bottarga is dried outdoors! Here is the recipe (we do it between June 15 and August 30).

1) Take a mullet called "poutarguier", press his belly and if he leaves a little yellow liquid is that he has eggs.
2) Make a cut from the end where you pressed, with a sharp and sharp knife, all along the belly.
Pass two fingers inside to extract the egg bag, with the attached piece of fish so as not to burst it.
3) Wash with sea water, and take care to squeeze the nets that are reddish to get the blood out.
4) Put the bottarga on a plate slightly bent.
5) Salt well on both sides, about 1 hour on each side. The water that is in the eggs goes away.
6) Put the eggs between two boards with a weight on them to return the rest of their juice, for about 6 hours.
7) Hang the eggs on a wire and let dry about a week.
If you want to save some time, put them in front of a fan in a cool room.
Travel plan