The coastal path presents a sample of the riches of our heritage.
While walking you will find information on geology, archeology, history,
human activities, fauna and flora presented in the form of didactic panels. 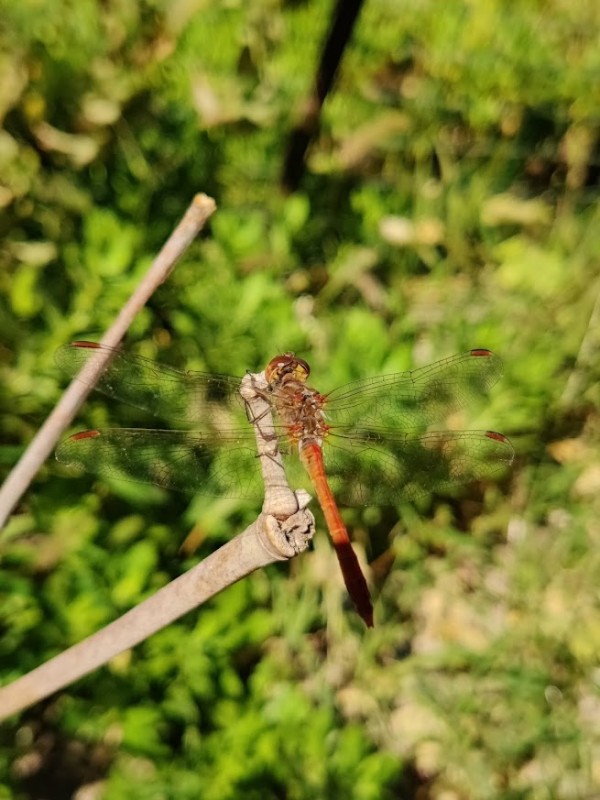 The pipistrelle of Nathusius, the Etruscan pachyure, the rabbit of Garenne,
the marten, weasel, red fox, red squirrel

The fuller chafer, the calosome, the cicada, locusts and grasshoppers,
the jagged magician, the stick insect. The ocellated lizard,
the green lizard, the seps, the Montpellier snake, the stepped snake

The caugek tern, the common tern, the great cormorant,
the white-necked gull, the black-necked grebe, the northern gannet, the black-headed gull

Discover the flora and fauna 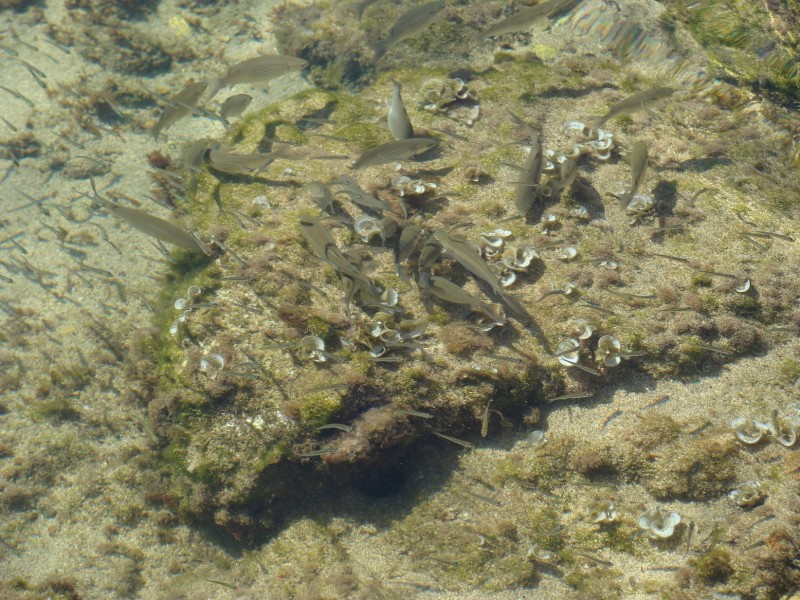 There are more than 400 species of different forms, including mussels, oysters, tellines ... On our coast, two of these species are protected by the law of 1992: the sea date (it owes its name to the fruit of which it has the shape and the color and measures about 8.50 cm long) and the large mother-of-pearl (it is one of the largest shells in the world. It lives, generally planted in the substratum, mainly in the Posidonia meadows).

Posidonia is endemic to the Mediterranean. It is a phanerogam (flowering plant), which left the land for the sea more than 120 million years ago. The seagrass beds, these large underwater meadows that we call "lungs of the sea". They are located between the surface and 40 meters deep, and represent one of the major ecosystems of Mediterranean coastal areas where many species are found to feed, produce and hide.

• The seabed of the Côte Bleue

By definition, a karst is a set of limestone corrosion phenomena. In this sector, we find, exceptionally, continental karsts in a coastal position due to the movements of the sea. These rocks with holes which give a particular aspect to the landscape, serve as shelter for many plant and animal species.

These rocks date from 16 to 20 million years old and correspond to the Burdigalian stage. These limestone rocks formed in a shallow and warmer sea than today, hence the wealth of marine life. There are notably pectens (scallops), oysters and sea urchins.

Since Antiquity, the coastal quarries of the town have been widely exploited by Marseille to build the main monuments of the Marseille city. These quarries offered a double interest: outcrops of soft rock, easy to cut, a shell limestone characterized by a pink or yellow color, and a coastal situation of the quarries which facilitates the transport by the direct embarkation of the blocks on boats. Several mooring points for these carrier ships have been spotted on the rocky coast.

The Baou Tailla quarry, established well above sea level, is one of the best preserved coastal quarries. The extraction of stones continued on this deposit at different times, until the 18th and 19th centuries. This quarry is characterized by three large extraction units, distinct from each other by vertical cut fronts. The traces of tools left by the work of the quarrymen allow us to reconstruct the various extraction operations, which demonstrate processes that have changed little from antiquity to the industrial era.

The Beaumaderie quarry site is one of the coastal sites exploited by Marseille since antiquity, for the construction of the main monuments of the city of Marseille. Other deposits located in the immediate hinterland are also subject to exploitation, until the medieval and modern period. The deep ruts which lead towards quarries located in the interior, testify to the intensity of the transport of stones brought back to the coast for their embarkation.

Spectacular in size, the extraction floor of the Beaumaderie shows a grid which suggests the organization of the site. Different axes of orientation according to the extraction sectors reveal the simultaneous activity of several teams which operate independently of each other.

It was built from 1942 during the Second World War. It is one of the elements of the German military fortifications intended to protect the shores of the Mediterranean from a possible landing of Allied troops. A 1946 census reported between Lavéra and La Couronne the presence of 99 blockhouses, about 100 works for large caliber guns, 85 sites for heavy machine guns and minefields bristling with frieze horses.

Since antiquity, dozens of boats have run aground on the reefs and rocky bottoms of the harbor of Marseille and the Côte Bleue.
- For the Greek period, three ships from the 5th and 4th centuries. BC are known: the so-called Sausset wrecks on the islet of Aragnon, Bonnieu 3 off Laurons and Carro. They carried cargoes of wine amphoras and Marseille tableware, which reflect this period of Marseille's commercial and economic expansion.
- For antiquity, no less than eight wrecks, dating from the 3rd - 4th century. after J. - C., sank in the bay of Laurons, which then housed a vast port complex.

Carro, a fishing village, constantly exposed to the dangers of the sea, had to have a cross as a place of worship. Thus, on Easter Monday in the year 1863, blessed at the Church of La Couronne was transported by arms of men to Carro. Erected at the entrance to the port, it is dedicated to the memory of fishermen who disappeared at sea, a commemorative square reminds us of them since 1822. 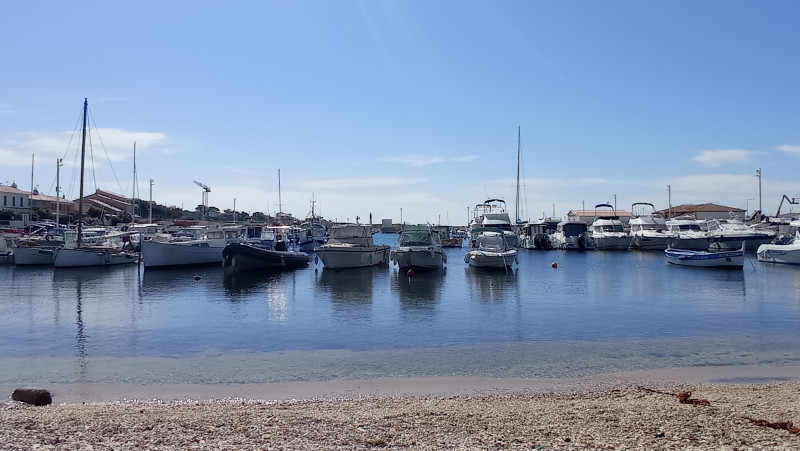 • The port of Carro

The main activity of Port of Carro is fishing. The Madrague then the "Seinche" were practiced there on a regular basis. Carro has returned to its tradition and a dozen boats still practice tuna fishing. Carro is also distinguished by the practice of "small business". It is indeed in the first departmental rank for this coastal fishing which regularly brings back rock fish and white fish sold directly in the port. Mussel farming (mussel culture) and sea urchin fishing help make this small port a real seafood market.

Built in 1887 and enhanced a century later, it is the last representative of the three semaphores that previously existed on the municipal coast. With a clean height of 27 meters, it dominates the beach at 50 meters from sea level. The Semaphore belongs to the French Navy, it operates 24 hours a day, 7 days a week. The Semaphore monitors maritime approaches , it ensures compliance with maritime regulations, controls commercial navigation on the accesses to Fos and Marseille, locally monitors the Verdon beach, the Carro spot and the Marine Park.

In the Middle Ages, surveillance systems called "pharots" followed our coasts in order to signal dangers but also to position capes and points. This system made it possible to report the presence of pirates from Antibes to La Couronne in less than 30 minutes by lighting two wood fires.
The current lighthouse was built in 1960, replacing the old one which dated from 1857.

From the beginning of the 6th century BC, the development of maritime trade and the proximity of the Phocaean city led the Gallic populations to settle by the sea. Thus, two Gallic villages were established, one on the tip of the Arquet, the other, more to the east, on the cape Tamaris.

Discovered in 1955, the coastal habitat of Arquet was explored until 1961 by Charles Lagrand, in the south-western part of the point. The Gallic village is protected by cliffs overlooking the sea on the south side and defended to the north by a fortification which bars access to the site. The occupation of this habitat extends from the beginning of the 6th century to the end of the 4th century BC. The organization of the dwellings testifies to a structured town planning, composed of elongated blocks served by two streets. There are 35 to 40 of the houses with a single room, quadrangular plan and each occupy 9 to 16 m² in area. At the end of the 4th century BC, the village was burnt down and destroyed, probably following a military attack by the Greeks in Marseille. Its abandonment undoubtedly allowed the opening of the first coastal quarries for the benefit of the great city.

The Gallic village of Tamaris is located on this site at the beginning of the 6th century BC. The coastal installation allows the local population to benefit from the food resources of the sea and inland, but also from trade. Greek and Etruscan maritime. Research carried out since 1997 has revealed a vast agglomeration of almost 1.5 ha protected from the south by cliffs and defended to the north by two lines of fortification which divide it into two parts. Succeeding houses of wood and cob, the built-in village which developed from the first quarter of the 4th century BC shows the arrangement of dwellings in various shapes, organized along the axes of circulation. : single-room houses isolated from each other or grouped together in blocks / houses with several rooms, in a row, or with a courtyard vestibule.

• The chapels of Sainte-Croix

- The old chapel (12th century) was built by the Benedictine monks of the Saint-Genest priory of Jonquières, who dedicated it to the Holy Cross. Called "Santo Terro" by sailors, this place and its sanctuary depend on the parish of Jonquières in Martigues until the Revolution. This is why the Penitents of the three districts of Martigues liked to go there on pilgrimage on May 3 and September 14 to honor the Cross of the Savior. Mass for Lent and Easter was also celebrated there.
- The new chapel (17th century) has suffered damage and alterations for many years. We do not know the reason which prompted the clergy to abandon the ancient chapel to build a new one. Four columns of the old chapel have taken place in the new sanctuary, they make the link between the two holy places.

These are German fortifications from World War II intended to protect the shores of the Mediterranean from a possible landing of Allied forces. 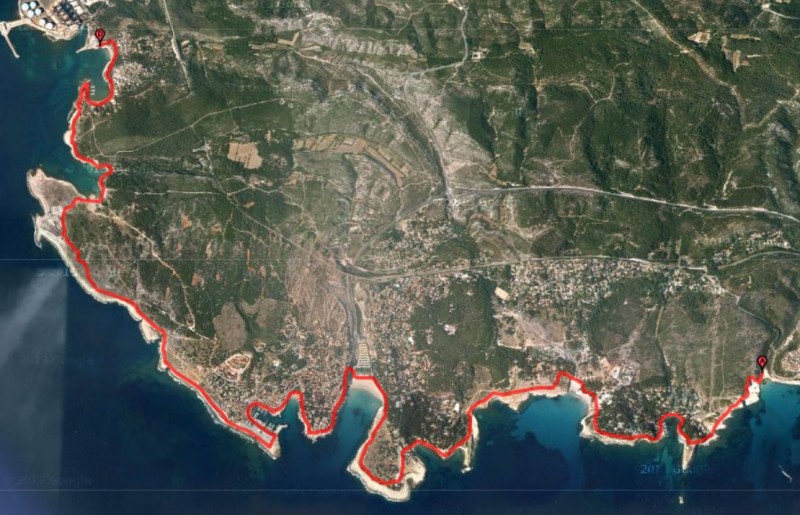